I thought this Fen Drayton 10k was an ideal opportunity to practice my range of facial expressions.The first pic demonstrates aghast puzzlement with the physicality of prolonged exercise. Of course this still picture is unable to capture me muttering to the Greek gods, vainly pleading with them to send a favourable wind to waft me quickly to the finish line. The second image is a study in the desolate melancholy and gnawing loneliness of the long distance runner pounding the drear, mist shrouded moors, in the depths of winter, a score of miles from shelter and a warm fire. Or perhaps this is my best grumpy face. I can’t quite remember at the moment.

This was the weekend I did four races. On Saturday I ran parkrun at Cambridge (5k) and came in only 14 seconds outside of my personal best. Forsaking social intercourse, I jumped into my car and sped off immediately (I had left the engine running to save precious seconds) to an adjacent village to do another race of 4.5 miles. Yesterday I did the above 10k and today the Histon and Impington 5k. Unusually, I was pleased with all my times. I’m working on running faster but this also accompanied by a running style which seems to worry people. As soon as I passed the line yesterday, a funnel marshal asked if I needed to sit down and another one said they would get me some water. My reply? If I need to recline, it will be on the top of Mount Olympus to the first question and I’ll accept ambrosia but nothing else to the second question.

At the 5k today, I did feel more tired than usual but did OK. Unfortunately, Lorna confirmed my running gait was less than attractive and a  faster club runner pal asked if I had injured my foot during the race. He thought I was partially collapsed on the finish line. Errrr….no! I was simply making a supreme effort to outrun several chums behind me. But I do admit I’m not a pretty sight at the end of a race. I don’t seem to be able to run with my mouth shut or compose my face into an expression of serenity, even for a few seconds, when I see someone I know with a camera.

Anyway, I’m out with the club road running tomorrow evening and there’s a club run 5k on Thursday. I’ve just registered for a local new half marathon (Flaming June) on June 1st. I’ve got out of the way of longer training runs and will need to start soon. This will take me to the banks of the river Cam where I suspect those water nymphs and minor water deities will attempt to delay me, or worse, use their magical powers to ensnare me into their worlds. It’s a risky business, running! 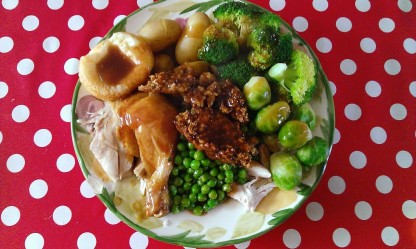 This is my roast chicken supper last night, the fuel of super heroes. The stuff in the centre is stuffing not sausage meat. I don’t eat pork now. I kept four pigs for eighteen months. They were beautiful creatures and good communicators. They gave wise advice in the main but their running tips were rubbish.