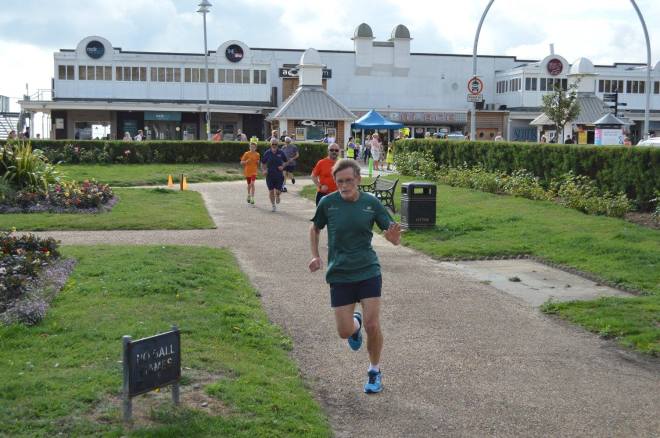 About six weeks ago I developed bursitis of the hip and had to pull up at Cambridge parkrun. I had a half marathon coming up in early September and hadn’t been doing any distance training and the injury put the half at risk. I started running a couple of weeks later, taking it very easy and for short distances. Now, nearly six weeks post injury I think I’ve fully recovered. Apart from parkrun I’ve done 45, 60,90 and 120 minute runs with no obvious problems. This includes running 13 miles yesterday. So I’ll be doing the half in 9 days but I won’t go mad. I’m still under trained for the distance but I don’t think I’ll re-injure myself.

The above pic shows me deftly negotiating a municipal flower bed at Lowestoft parkrun recently. The course was mostly along the seaside promenade and a lovely run it was, too! 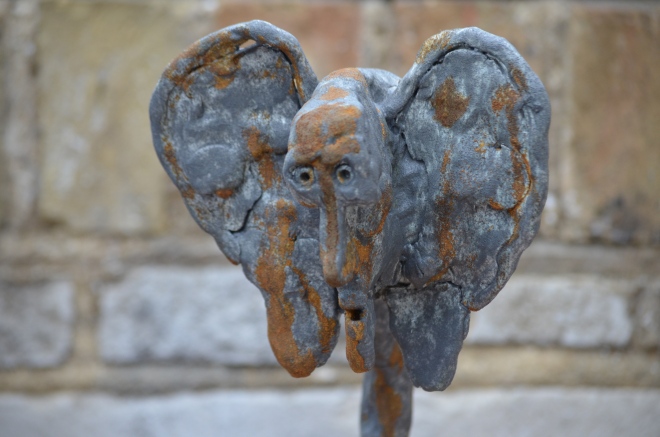 Eighteen days ago I had to pull up at Cambridge parkrun with shooting pains in my hip (obviously I completed the 5k walking) and the next few days I was limping and having difficulty climbing stairs. After I saw my GP who is sympathetic to running injuries, my mind was set at rest. She diagnosed bursitis which is inflammation of the bursa, a small sac of fluid between bone and tendon or muscle. I’ve never had any problems with my hips in the past and as usual when I’ve acquired injuries running, the cause has its origin in activities like heavy lifting and sometimes heavy lifting and walking awkwardly at the same time. This time it was barrowing concrete slabs and a ton of sand over 150 metres of grass and gravel.

I didn’t run at all for eleven days then I ran 10 minutes on a treadmill and did Cambridge parkrun two weeks after I pulled up. I trotted around and did it about eight minutes slower than usual without incident. I really enjoyed  running in a more relaxed manner rather than putting in maximum effort. I was also very pleased to be running again, full stop. I don’t like not being able to run even if it’s for only a couple of weeks. My body is acclimatised to running. Not to run is like losing vitality. Note to self: engage your brain when lifting and carrying.

And so to bats. We knew we had a small bat problem when we found four bats in the house, in fact on three separate occasions we had a bat flying around our living room.  I know they’re not the size of pigeons but we’re not the Addams family either. Turning sleuth, I discovered two possible holes in our clunch wall in our living room (it’s an old 17th century cottage with plenty of holes, gaps, cracks and crevices) and duly filled them with lime mortar. Viewing the wall from the outside, I could immediately see a likely gap between the stone and wooden board. The droppings sticking to the wall below the gap confirmed it.

Bat habitats are protected in the UK but I wondered if they could cause damage if they are living cheek by jowl with youin your own home. What to do? Of course, I raced to the phone and rang Bat Help Line and resisted blurting out “I’m a bat, help me”. Instead I had a nice little conversation with a very helpful and informative woman which reassured me. They don’t do damage and they will vacate later in the season. There’s no reason not to live with them much as we did  with a colony of bees a few centimetres behind plaster board in our bedroom. The bees subsequently left of their own volition. The only downside was their habit of making odd hooting noises during the night. I’m slightly deaf and couldn’t hear it. Lorna found it tolerable but odd! It’s the countryside, innit!

Back to running again. I’m due to do a half marathon in just over three weeks. Not sure if I’m up to it. Firstly, my hip is not entirely back to normal and, secondly, I haven’t done much running lately. Plan: go for a couple of longer runs next week and see how it feels.