Trinity Hall’s Jerwood Library, completed in 1998 and opened in 1999, just 649 years after Trinity Hall was founded in 1350. That’s a long time to wait for a decent library. I was a little anxious about the vaguely Alfred Hitchcockian man gazing down at the punt about to pass beneath him. I had a vision of him vaulting the railings, landing on the punt and crashing through the wooden floor.Needless to say, it was all in my head and no punt related incident or tragedy occurred.

I am now a returned club runner having virtually stopped attending from October last year. Yesterday was a pleasant, sunny day in Cambridge (see visual evidence above) but when I left home at 6.10 pm it was overcast cold and raining. By the time we road runners left the warmth and shelter of the Cambridge University Athletics clubhouse it was raining hard and continued to do so for three quarters of the session. Of course I under estimated the severity of the weather and didn’t wear the right jacket. I got thoroughly soaked and if the temperature had been lower I would probably have given up. However, after warming up and running the first of 4 x 1500 metres, I felt much better. On my return I had a shower and tasty meal and overall I felt energised, alert and more alive. So that’s my advice. If you’re feeling tired, lethargic and generally lackadaisical, go for a hard run (in the rain preferably) and you’ll find yourself on top form again (disclaimer : you need to have a certain amount of running fitness or you might go from bad to worse, and this approach  might only work for me. Has this advice been helpful? I’ll leave the world to decide.

I saw something relatively unusual today. A man and a women, probably in their mid seventies, passed by me riding a tandem tricycle. They weren’t sporty and didn’t look as if they were fitness advocates.They were cycling together, out in the sunshine, enjoying themselves and going places. The tandem tricycle was stable and they didn’t have to continually focus on balance. Marvellous!

I’m reading the third book, The Conscience of the Rich, in C.P.Snow’s Brothers and Strangers sequence. I think it’s the right one. They weren’t published in the right sequence and I’ve managed to mislay a number of them after I was forced to tidy them away. Note to self : begin to stack books in towers throughout the house so they are ever at hand.

Good Friday arrived with some reasonable weather. We went to Wicken Fen, the first nature reserve to be owned by the National Trust in 1899. It has a range of wetland habits – fen, reedbed, wet woodland and open water –  on a deep peat soil which is kept wet by rainfall and clean, chalky river water. It’s currently around 255 hectares but there is a hundred year plan to gradually buy up surrounding farm land and increase the wetland area to 5,300 hectares extending southwards to the edge of Cambridge.

We had a nice coffee, and later a simple meal, at the National Trust cafe and managed to bump into two running couples we know from Cambridge parkrun. 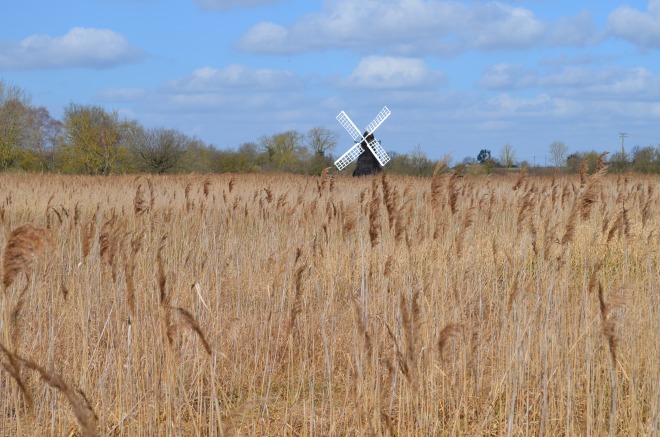 A small smock wind pump built around 1912 and the last surviving wooden wind pump in the Fens. Still in occasional use in summer.

Just over half a mile from the entrance to Wicken Fen is Wicken Corn windmill and still milling flour. Of course I went in, climbed to the top and took some pics of the giant wooden cog gearing. A beautiful structure, inside and out, restored by this man, and his colleagues, over several decades. A fantastic achievement! 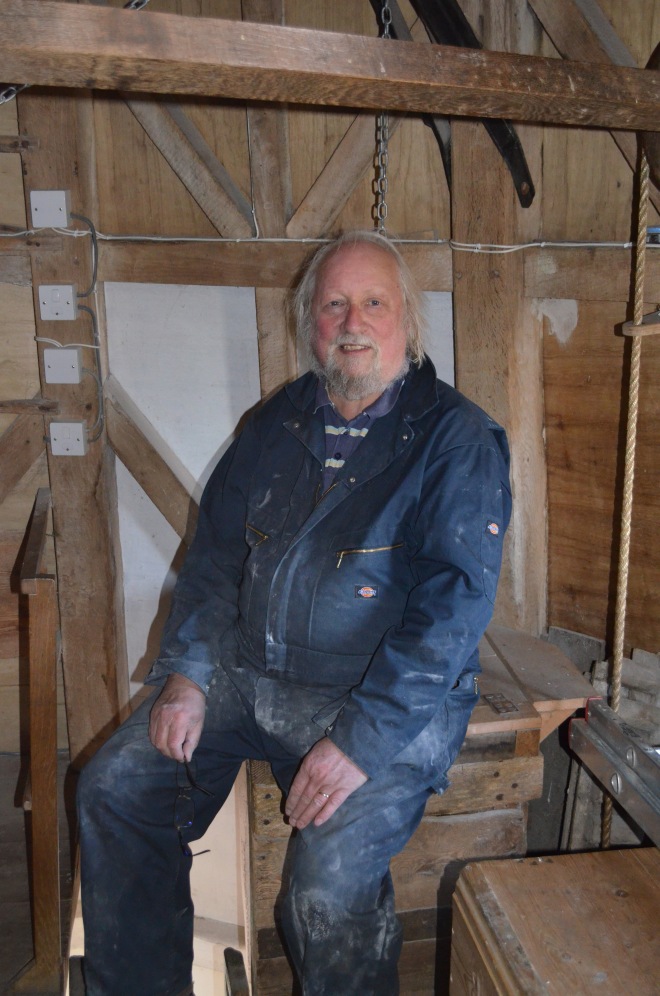 Hey! Is this a running blog or not? Last Sunday I ran a five miler at Swavesey, on a road surface, alongside open fields. The course was flat as a pancake. The sun shone and it was a good run for me. I did feel a little envious because a lot of running chums were taking part in the half marathon which was on at the same time. Interestingly, a lot more ran the half compared with the 5 miler. I’m still recovering my running fitness and it would have been a mistake to do more than 10k but it’s fascinating the power a little bit of warmth, blue sky and sunshine  can exert on my motivation and running well being.

Tomorrow is parkrun and the weather forecast is overcast with rain in the afternoon. Last week the field was 450. That’s a large number on  narrow trail paths. Part of course is by the side of a lake and recently anglers have pitched their tents so half the narrow path is obstructed. A good example of passive aggression. 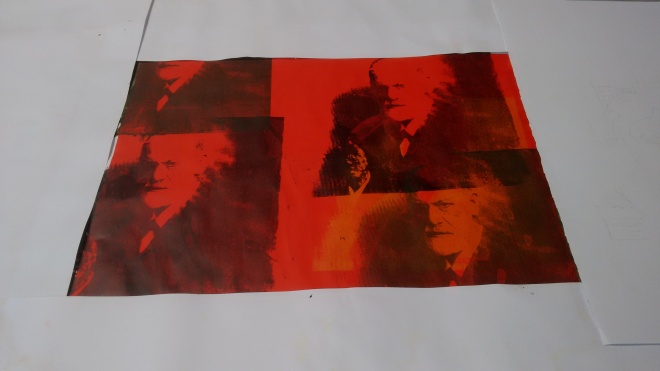 It’s Sigmund Freud, of course, smoking a cigar as usual. Is it symbolic? Well, as the top man said, sometimes a cigar is just a cigar! That’s just his opinion. Certainly it must have contributed to, if not caused, his cancer of the jaw. Was he a runner? I doubt it. Missed out there then, didn’t he.

I’m trying to get my running back on track. Today’s parkrun was a reasonable time for me at the moment and tomorrow I’m running a five miler in Swavesey. There’s a half marathon going on at the same time but I’m not up to that distance at present. My ex arch rival, Mike, will  be doing the five miler and he’ll be around four minutes faster than me. Another rival, Kerry, will do the half. Having missed the recent Cambridge half due to illness, my next half will be the Flaming June, which unsurprisingly, is run in June. I’ve got various 10k races in the pipeline. Training with the club seems to have taken a backseat and I don’t think I’ve been out with them since I injured myself during the Wimpole half marathon last October.My enthusiasm for training in a group waxes and wanes and currently I still prefer to run alone.

Iain Duncan Smith, the Work and Pensions Secretary, has resigned over Osbourne’s Budgetary  cuts to to benefits received by people with disabilities alongside tax cuts for the richest. He stated that the cuts were “simply not fair, not right” and it was wrong to finance tax cuts for the better off by “taking money away” from those with disabilities. David Cameron professed himself to be “puzzled and disappointed.” George Osbourne is left with egg on his face. They’ve all got blood on their hands as far as I’m concerned. It’s more of a case when thieves fall out. Iain Duncan Smith is hardly a man with a conscience.

Nearly forgot. Did the Freud print at my print making class. It looks okay but the quality is poor. The point is that the more you practice the better you become and this is only a first try.

Cambridge parkrun today. I feel the pain caused by the eyes boring into the back of my head as I desperately attempt to stay in front. Should I gel my hair back, should I get it shorn ? Or shall I grow it, with a beard, so I am indistinguishable from Saruman the White (later of Many Colours). I’m talking Lord of the Rings here, of course. No contest! It might take me a couple of years but I’m sure I could find fame as the Wizard of Cambridge parkrun. A further omen was clearly given to me when I noticed that Heffers bookshop front window displayed a full range of wands, real magical broomsticks and other wizard paraphernalia. Makes you think, doesn’t it?

I’m getting over my third cold this winter and still haven’t fully recovered from the food food poisoning that stopped me doing Cambridge half marathon two weeks ago. My appetite hasn’t returned to normal, I still feel queasy several times a day and my taste for sweet foods is diminished. None of the above is having a beneficial effect on my running. Moan,moan moan! Roll on the warm, dry weather.

I occasionally buy the weekly magazine New Scientist if there’s an interesting article. Today, the reason to buy it was a piece on placebos. The first few paragraphs made me laugh out loud. A woman with irritable bowel syndrome for 15 years saw a TV ad recruiting participants for a new study. Desperate for help she signed up despite learning that the potential treatment she would be offered consisted of either nothing – or pills filled with nothing. Needless to say, her condition improved considerably. She’s hoping to sign up for a similar new trial and she’s been trying to get hold of more of the pills filled with nothing ever since the old trial ended. I laughed because it’s so counter intuitive. The placebo works even though the recipient is fully aware that it is a placebo. This is now an accepted given. There’s now loads of evidence that placebos work and many of the medications we are prescribed are little better than placebos, with much greater side effect profiles   You couldn’t make it up.

A computer programme, Alpha Go, has beaten a top Go master (human). Oh dear! I used to play Go with an old chum but no longer. I miss the game and unfortunately there’s no-one around me that plays it. Cambridge has a couple of Go clubs but they look rather intense. I don’t think I would fit in. You can’t take these things too seriously.

It’s Day 6 following poisoning by cheese cake and my forced withdrawal from Cambridge half marathon. I haven’t run since then until today when I jogged a couple of miles. I can recommend food poisoning (in my case) for first class nausea and vomiting, an over riding urge to lie very still, weird fluctuations in temperature,subsequently knocking back my appetite, occasional mild nauseous feelings and loss of interest in sweet foods. It’s around 359 days to go before the next Cambridge half but I’m guaranteed to remember not to eat New York vanilla cheese cake the night before.

Good news on the two runners who went into cardiac arrest near the finish line. They received very prompt treatment and are now said to be recovering well in Addenbrookes hospital.

The weather looks cold and wet tomorrow for Cambridge parkrun. I won’t have any problem doing 3 miles and I’m volunteering afterwards by collecting the course signage. I don’t find this task onerous. It’s very pleasant walking around the deserted woodland trail path and only takes 17-18 minutes.

Very interesting article in yesterday’s Guardian on narcissism It’s surprisingly difficult for people to disguise or hide narcissistic traits on social media although most are not motivated to do so. It seems to be deliciously tempting to reveal you’ve been for a cup of coffee, or a restaurant and so easy to become adept at making inane comments and compliments with the intention of having them returned. I blame ourselves, the facilitating social media platforms, cultural dumbing down, lack of emotional and psychological awareness and, as usual, the Evil Tories (although I haven’t refined their particular responsibility yet but I’m working on it).