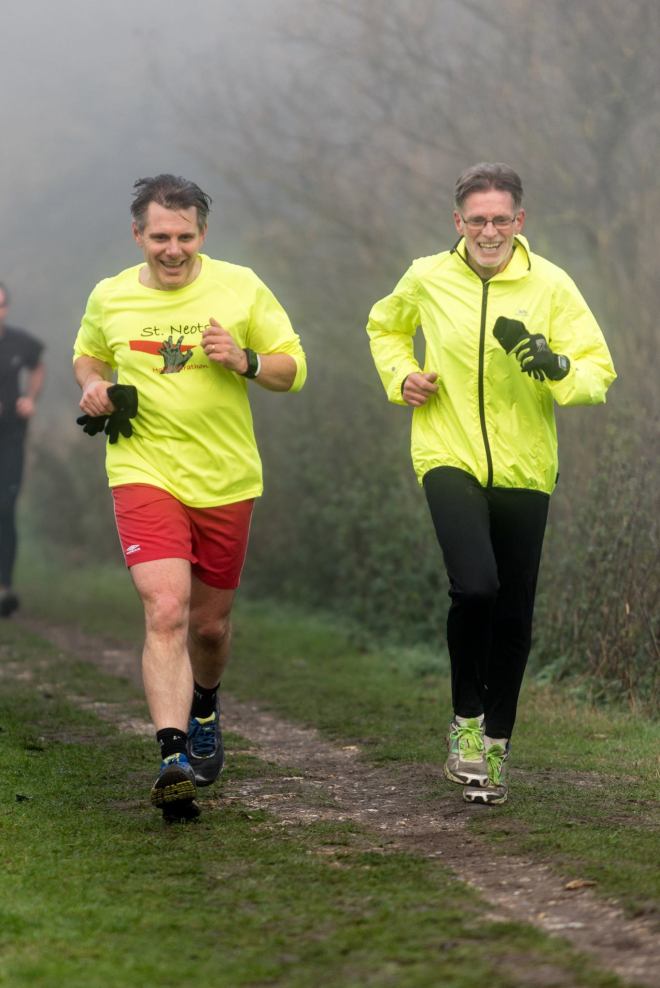 New arch rival at Cambridge parkrun! Unusually, I’m running and smiling as we we approach the finish line and we come in within a second of each other. Cambridge has the good fortune to have a consistent photographer in John Wilderspin (for example, this week he’s put up 400+ images). There’s something confirming about a personal running picture even if it’s not flattering. There’s always the next one!

Running’s not very complicated at the moment. I’m tending to go for short 2 mile runs 3-4 times a week and 5k parkrun on Saturdays. Unfortunately, I’m not finding last year’s form at all but on the plus side I have the pleasant delusion that I am faster than ever. There’s a satisfying feeling of speed despite my stupid watch telling a different story. Possibly I’m running so fast, I’ve gone back in time. I know Superman can reverse time by flying around the Earth multiple times faster than the speed of light (I stand to be corrected on this with reference to the specific DC Superman comic). But then again, I know in my heart of hearts, being given a parkrun token with place number 172  emblazoned on the plastic coating is not compatible with magical running powers.

Talking of magic, I read a very enjoyable review of Elf Queens and Holy Friars :Fairy Beliefs and the Medieval Church by Richard Firth Green, £36. (London Review of Books : don’t worry, non London people, you too can have access to this literary mag). Widespread belief in fairies and mythical creatures meant they were given responsibility for all manner of unfortunate occurrences and circumstances and their influence waned slowly as society became more rational. Even today many people still believe in evil fairies and a malevalent Fairyland, chiefly UKIP voters and Daily Mail Readers.

Leonard Cohen’s death is a very sad event. He’s been a cultural and emotional part ofmy life since I was a teenager in the 1960s, listening to his first album in our 6th form common room. Drone, drone, drone. Powerful songs expressing adolescent feelings and a wonderful backdrop to growing up, reading Krisharmerti, Kafka, Hesse, Mervyn Peake, Oz, the International Times, walking the streets of London and seeing the best bands in London.

Ms Alive and Running and I ran Gorleston parkrun, near Great Yarmouth, Norfolk recently. It was a fine, warm, sunny day and the course comprised of two simple laps of a lower and upper sea promenade with only one steep zig zag path connecting the two levels ie we only had to ascend it once because we started at the top and finished at the bottom.

We stayed in this little hobbit house overlooking the sand dunes in Winterton -on-Sea. I went for a lovely run to an adjacent seaside town by way of the dunes. I struggle to make an appropriate comparison but suffice it to say that one was a WI stronghold and the other a magnet for fast food and candy floss lovers. The latter was undeniably colourful in every sense and I found my senses being overwhelmed. Winterton, I suspect, is a Tory and UKIP kind of place but I might have found evidence to the contrary when I fell into conversation with Peter Chapman who was painting images onto his camper van. It transpired he is the uncle of the Chapman Brothers, Jake and Dinos, nationally and internationally known visual artists with a controversial portfolio. He is also an artist and sculptor and gave me a tour of his studio and garden.This was very generous of him. I can confirm that he is not exactly a typical resident of Winterton.

Back to Cambridge. I like to watch and take pics of the punts, particularly from Garret Hostel Bridge or King’s College Bridge. Today I went to Queens’ College and went onto the Mathematical Bridge. 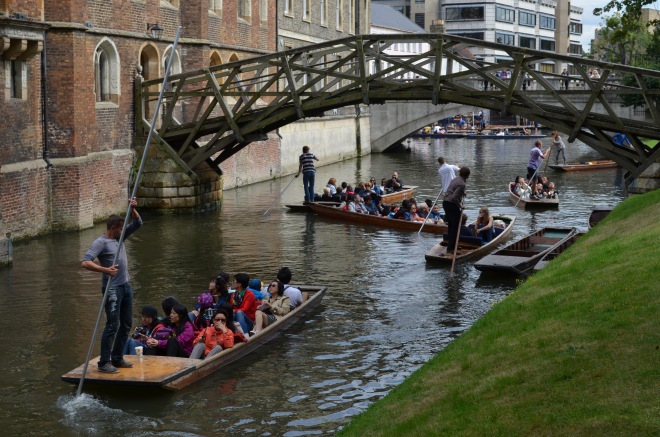 My Druid book finally arrived, by Amazon (non-drone) rather than Guardian bookshop who said it was out of print. Naughty Guardian bookshop! My spiritual and magical renaissance is still on hold because I’m reading Gut : the Inside Story of our Body’s Most Under-Rated Organ. Very readable, very interesting, a complete education in intestinal health, ill health and poo related facts. Warning : sitting on a Western style toilet seat is not good for gut health. Squatting is much better.

Lastly, I’ve been doing plenty of digging and planting donated plants. My therapeutic gardening project continues to progress at a glacial pace for various reasons but is set to take a leap forward when I cover the constructed skeleton of the polytunnel with its plastic cover in the next fortnight. I’ve visited another gardening project, Gardening with Grace, in Bedford and they’ve visited me. It’s been very helpful and given me a different perspective on how to go about what I want to achieve. 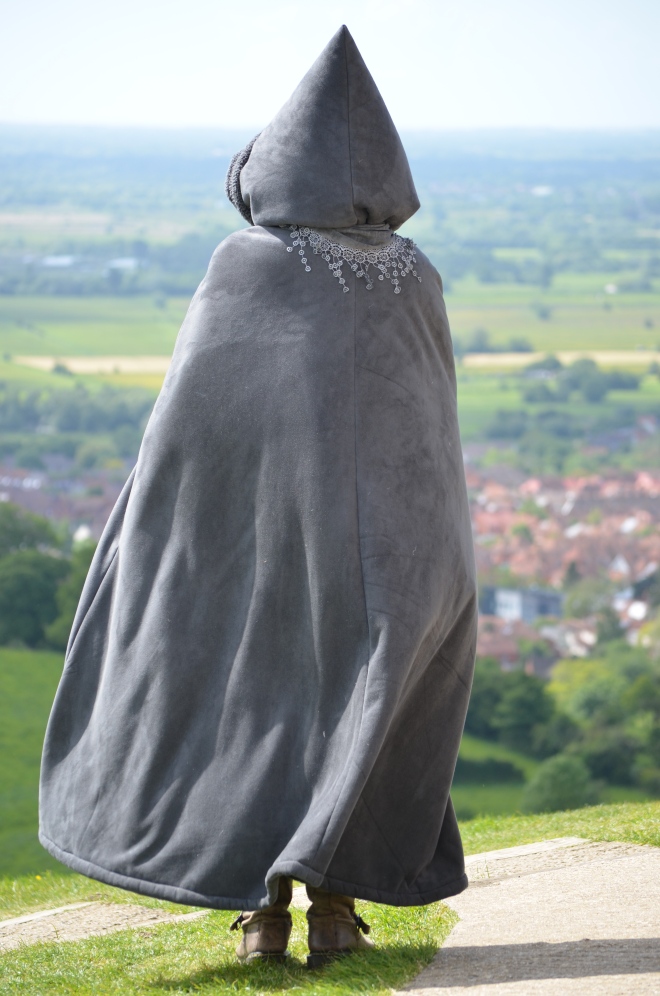 With all the drama and heightened significence of a single droplet of water falling to the floor in a tropical rain forest in the rainy season, when the volume of rain has been extreme, even for a rain forest, I resurrect this blog !

Aaahhhh……. the pull of nature and mysticism. We went to Glastonbury recently to visit the town and climb the Tor (not to attend the Festival). We like Glastonbury. There’s a feeling that the 60’s never went away, a Center Parcs for old hippies, a place where you can easily buy a magic wand and no one bats an eye lid if you wander around in cloaks, habits or pointed hats.

But prior to entering the enchanted town, we  stayed at Montacute and ran the Yeovil Montacute parkrun in the grounds of the eponymous House which is owned by the National Trust. And a very nice late Tudor country pile it was,too.

A lovely parkland course, the weather was clement and the run director and volunteers could not have been more friendlier or welcoming. We’ll definitely be returning (when the omens are auspicious and the sun moon and stars are correctly aligned).

Forget Dubai, New York or even East London, Glastonbury is the cool destination to hang out if you are an actual or even a  closet pagan. It’s so easy to buy a wand. I spent a lot of time looking in a wand cabinet, perhaps too long and Mrs Alive and Running bought me some patchouli oil.  We ate in the vegetarian Rainbow’s End cafe, natch, and generally tried not irritate the wizards and witches by treading on their robes.

And so to the Tor!

Magical, mysterious, steeped in spiritual history, overlooking the Somerset Levels and the Isle of Avalon, the Tor is topped by the roofless St. Michael’s Tower. The hill is associated with King Arthur, paganism, goddess worship and having a mystical positioning. It’s a beautiful mound to climb and then sit around thinking about nature worship, astral planes and magic while bracing yourself against the wind. By a wonderful coincidence (or was it pre-ordained) we arrived at the top of the Tor as 60 or 70 druids were climbing up the other side to gather for an early summer solstice celebration.They belonged to the Order of Bards, Obvates and Druids and were chatty and friendly. They were quite happy for people to watch their ceremony, respectfully take photos and ask them about their beliefs. They were down to earth (no pun intended), articulate, intelligent and sensible. We liked them. 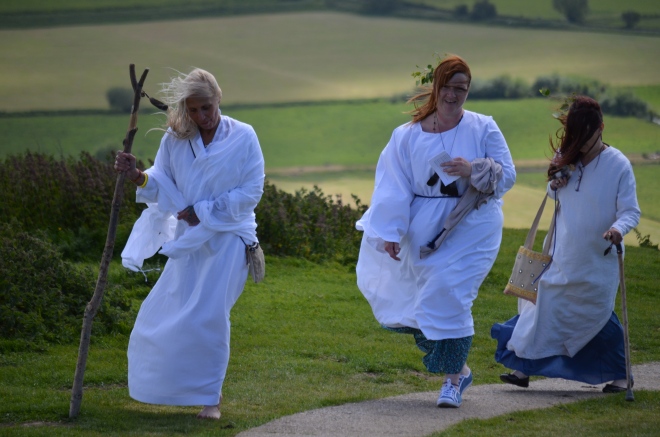 Yesterday, it was very warm (although not as hot as London’s 34-36c today). Instead of running with the club in the evening, I went for a 9 mile morning run before the sun got too fierce and took a large bottle of isotonic drink in a holster belt. Sensible or what? It’s coming up to 6 years since I had my heart attack and I’ve run consistently and longer distances since then. I don’t know any other runners with coronary heart disease but it would be nice to know how they are faring and their experience of taking the obligatory medication. Are there any out there in the blogosphere?