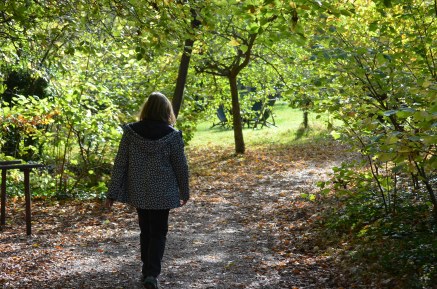 We arrived at the Orchard early on a chilly, sunny morning. All the deckchairs and tables were out but it was virtually deserted. In the sun, it was warm enough to sit out to eat or drink tea or coffee, and it soon began to fill up. We had walked from Newnham along Granchester Meadows and on the way there, walking by the Cam, we  spied this chap swimming towards Cambridge. On the way back, this group of cows blocked our path and despite negotiation, mediation, persuasion and a few more concepts ending in -ion, they stubbornly refused to move. Guess what? We went around them.

Last Sunday, I ran the Histon Bonfire Burn 10k. This went pretty well, by and large. The weather was cold and bright, all my running chums beat me and I met old running chum, Dominic, whom I hadn’t seen for a year or two. He also beat me!

Three years ago, I ran this race in the worst weather I have ever run in. Scouring wind, low temperature and driving rain.It gets worse every time I describe it. This was the only race I ever considered stopping prematurely apart from when I was injured. Subsequently I have always preferred over dressing for a race rather than wearing too little. I can run when I’m hot.

Today, Cambridge  parkrun was another mud bath as it was last week. As usual we were exhorted to run through the myriad puddles rather than dodge them and run into someone else’s path. This did happen last week when a runner was tripped, fell and broke his ankle. These kind of accidents are relatively rare, surprisingly since sometimes over 500 people are charging around narrow trail paths.

One last half marathon, for the year, next weekend, at St.Neots.

Poor America! Poor world! Donald Trump continues to make jaws drop with his wild disregard for truth, compassion and basic decency. The evidence for corrupt practises is slowly stacking up but how long will it take?

Good news on treatment for schizophrenia research. Trials are starting which explore the possibility that for some people, schizophrenia could be a disease of the immune system. Oliver Howes, a professor of molecular biology at the MRC London Institute of Medical Sciences and a consultant pschiatrist at the Maudsley Hospital in South London, and his team, have uncovered evidence, with other teams worlwide, that abnormalities in immune activity in the brain may be responsible for the illness.. Good Guardian article on this November 4th. 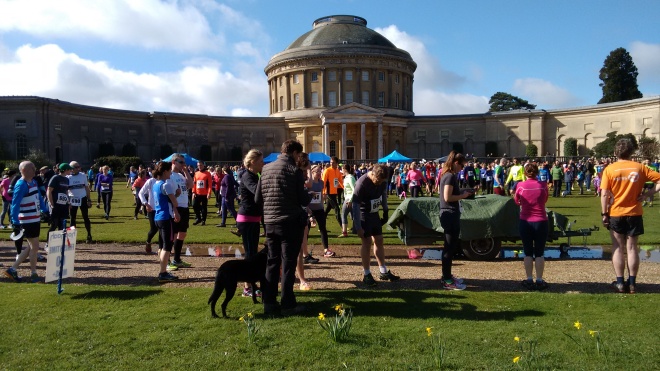 Icworth House, near Bury St. Edmunds, Suffolk and the venue for the first Hoohaah 10k of the year. Beautiful setting and a lovely trail course (in the main) BUT VERY MUDDY.

In fact there were hundreds and hundreds of metres of mud and easily qualified as the most muddy race I have ever taken part in. To enter the restaurant/cafe, shopping emporium and second hand bookshop, one had to don these blue plastic over bootees! One didn’t look very cool. 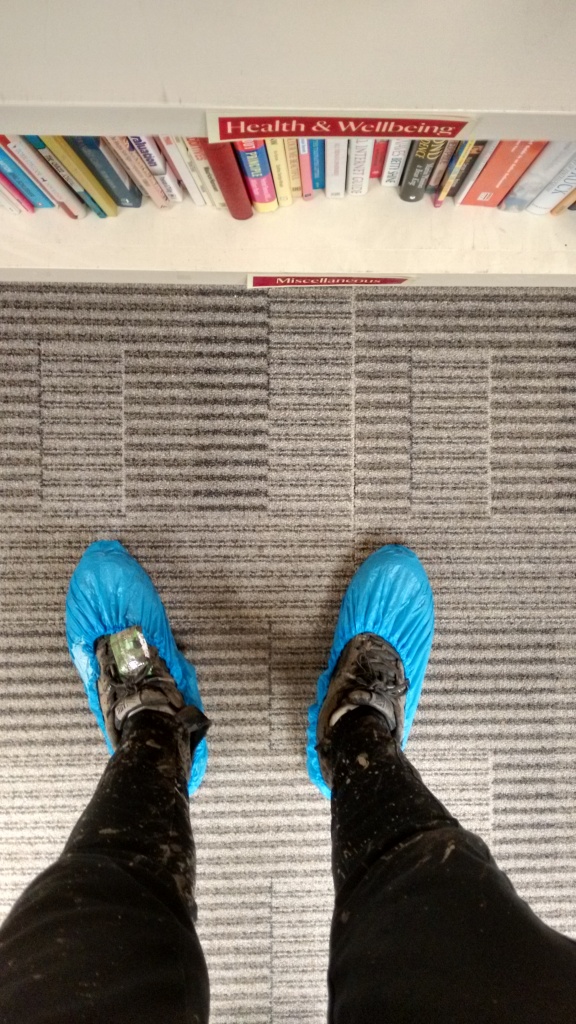 Fair enough. I wasn’t impressed by their bookshop, however. Not a patch on Wimpole Hall’s and I didn’t buy anything. Highly unusual, highly irregular but a memorable experience thanks to the blue bootees.

Still, the race was very enjoyable and later we had coffee at an outside cafe with our chums. 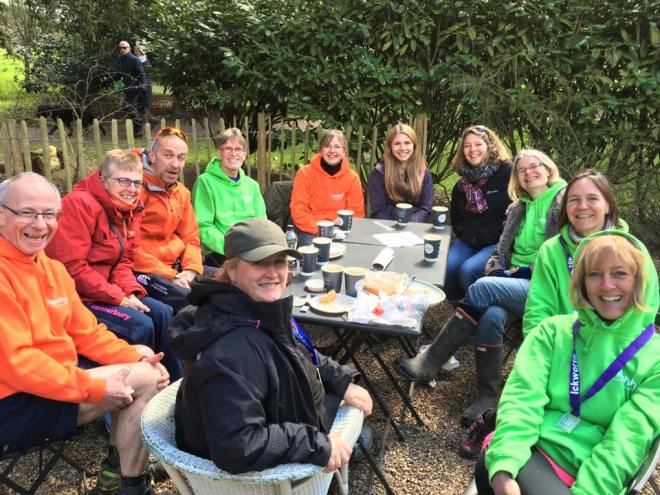 I found myself inadvertently sitting on the orange side and consequently ruined the symmetry.

Tuesday was running club and we did a “country fartlek” from the University of Cambridge Athletics Club to Grantchester Meadows, along the Cam.

Today, we ran Cambridge parkrun. Cold but a great deal dryer than last week. I couldn’t catch any rivals. I’ll have to choose new and slower rivals.

Tomorrow, it’s the London Marathon. Spectating, not running. It’s not easy devising a training regime for marathon spectating. I’ll know tomorrow when it’s all over. 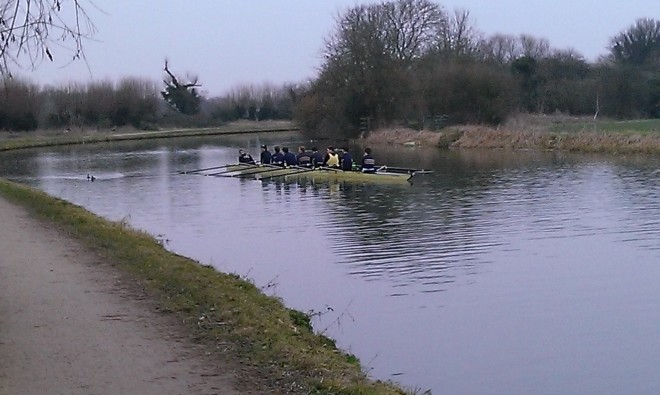 Very poor light levels in Cambridge yesterday. It seemed to be continuous  dusk ! I sat in front of the SAD lamp for a time and decided to brave the gloom. I felt like a hobbit in the dark murkiness of Mordor.But despite worrying about being fixed by the Eye of Sauron, I went out for a 10 mile run.

This Cambridge college eight was stationary and a coach was instructing them from the footpath as I ran past. I also passed a lone female angler, a very unusual sight. On my return journey, a man was holding the fishing rod  and the woman was standing behind him. They were both staring into the water and nothing was happening. Note to self : if I weaken and have angling type thoughts, squash them immediately.

I met five or six runners along the river path, all men, and no-one was particularly friendly. Two were talking and ignored me and another avoided eye contact deliberately. I condemn the former (unreservedly) but eye contact can be very difficult for some people. In the interest of fairness, my own visage, when running, doesn’t always suggest I’m Mr Happy and Receptive.

Anyway, the run went well, my mood was good and according to my borrowed Garmin I expended around 1100 calories. Later on I became ravenously hungry and felt like eating around 15,000 calories, one by one. I had an overwhelming urge to eat Christmas pudding and Ms Alive and Running thought we had one lurking in a cupboard. But no, I was cruelly denied. There was an empty space where a pudding could have easily have resided but didn’t. A delicious homemade one tried to shrink into the background and failed to avoid my attention. However since it needed a horrendous number of hours to simmer in water rather than 5 minutes in the microwave, I was doubly denied. I was forced to eat a piece of cardboard smeared with strawberry jam instead. 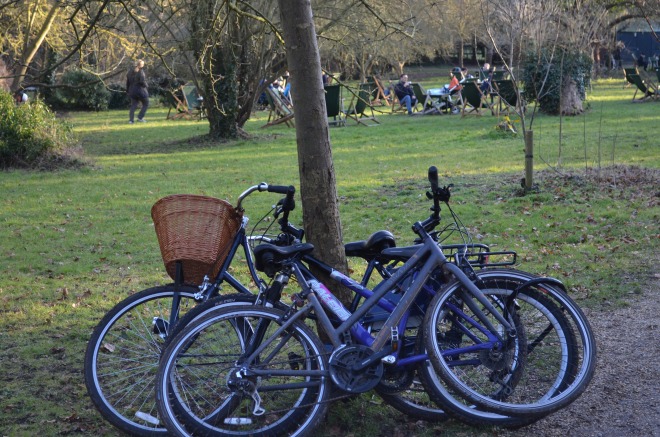 The Orchard Tea Pavilion and gardens at Grantchester along with the Rupert Brooke Museum. It doesn’t look much but it’s lovely. You can punt down from Cambridge if you’ve got the time, stamina and punting skills. Or, as we did, walk along Grantchester Meadows from Lammas Land and Newnham. I’m not making up these names! 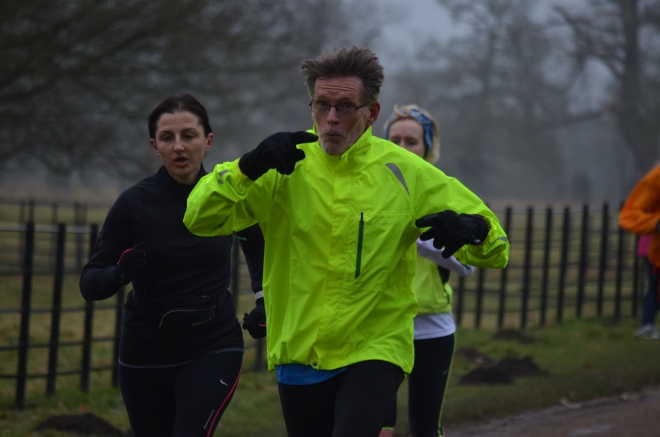 Here am I making a supreme effort to shut my mouth when I’m running (or more specifically when I know a picture is being taken). As you can see the energy expended has furrowed my forehead and made my hair sick up. I’m not sure whether or not it’s an attractive look. Perhaps I’m trying too hard and less is more. Clearly it’s a work in progress.

I’m at Wimpole parkrun and I’m dressed for Arctic conditions. The mild frost and occasional cutting winds didn’t make it excessively cold  for me but I’m aware how much easier and relaxed I feel  running in much warmer weather. My ex arch rival came in 3 minutes faster than me which reflects his increase in performance (or use of performance enhancing drugs). Looking at my times on this course 2 years ago, I was surprised to see that I’m running it about the same time currently.

No run today. Instead we walked along the river from Cambridge to Grantchester via Grantchester Meadows and had tea, coffee and a fruit scone  with strawberry jam at the Orchard Tea Pavillon, originally brought into public notice by poet Rupert Brookes and his chums. Surprisingly, it was warm enough to sit outside in the deckchairs in the eponymous orchard. Quintessentially Cambridge, shabby not chic, still looks down at heel but still something wonderful about it.