I ran around 7.5 miles this morning. From where I live it’s  3 miles to the river Cam and I ran about 4.5 miles along the river path. Loads of runners out, mostly training for the Cambridge half marathon. After the A14 flyover a dozen or so university rowing eights were on the Cam with all their support personnel. They looked cold! I think there’s a lot of hanging around. I suppressed an urge to advise them to retire to their refectories or libraries and have a game of darts in the warm. Instead I wove a path between oars and the coachs et al and sprinted on into the gloom, my bravado unacknowledged. 25 minutes later, I met up with my own support team (Lorna) who picked me up at the Green Dragon pub. This run was an outward journey only. Oh yes, and a first tryout for my new shoes. Loads of standing water and mud on the path. They felt very good.

Yesterday the conditions were very muddy at Cambridge parkrun and trail shoes were essential. Again, very overcast and cold. I wore suitable kit to combat the weather but it was still uphill work. And that’s saying something on a totally flat course.

The pic at the top shows the Shard tower and to the right the giant chimney stack of the Tate Modern gallery. The rectangular building on the right is a recent extension, Switch House and you can see the outside viewing level just below the top. This viewing level attracted much criticism from the residents of multi million pound flats who were overlooked by the gawping proletariat determined to enjoy all aspects of the 360 degree panarama. 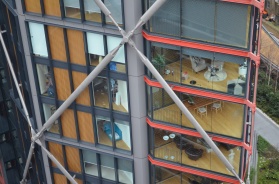 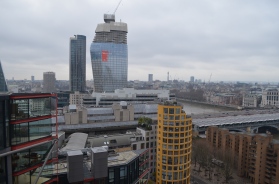 I have some limited sympathy. Some of the apartments  have visible blinds. But I also assume that buying such transparently open accommodation fits in with their comfort zone which includes living in a goldfish bowl. I didn’t actually see anyone moving inside or much evidence of clutter. Or books. That’s outrageous. 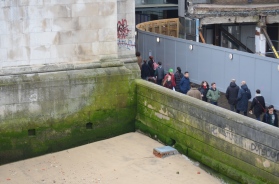 You can access the sandy foreshore  of the Thames when the tide is out ( not recommended when the tide is coming in). To walk along the beach feels exciting and remote and very different despite being within a few metres of the madding crowd.

Back to the Tate. We saw The Radical Eye exhibition of photograhy including Man Ray and later this month or next, we’ll see the David Hockney retrospective at Tate Britain. In May, the Alberto Giacometti retrospective opens, he of the magical elongated pointy men (and women) figures.

In my mid teens, I wandered around London on Saturdays and often visited Giacometti’s sculptures at the original Tate (now Tate Britain). I still find them beautiful, mystical and mesmorising (other adjectives are available).

Mr Giacometti moving his stuff around while munching a ticket.

The Church of England has received substantial criticism from 14 retired bishops over failure to provide leadership concerning gay relationships. It’s expected that the general assembly synod will approve a recent report from bishops in post which upholds the traditional teaching that marriage is a lifelong union between a man and a woman. The church insists that gay clergy must be celibate and clergy are forbidden from conducting same sex marriage services. An open letter rebukes the former bishops’ successors for marginalising the views of LGBT members of the church.

It’s these kinds of beliefs and and thinking that reveal the wilful ignorance and lack of compassion and humanity of organised, traditional religion. It doesn’t recognise healthy sexuality as a fluid spectrum or as a biological imperative. Far better to rely on a dodgy set of scriptures for guidance. God help the LGBT community.

And finally, the Tory goverment can’t help reverting to type. The nasty party abandons it’s commitment to unaccompanied refugee and migrant minors. Such a good idea to let them fend for themselves. I read a comment that the tabloids relinquished their support for the policy after pictures of teenagers benefiting from this programme were published last year appearing to show some of them as looking like young men. So it’s justified, then!

This is a little game we are playing at the moment. The above  door is in frequent use. How long can we enjoy fecund nature (yes, fecund is a word that’s constantly on our tongues) before sheer necessity requires us to cut back to gain access? Probably quite long, actually. I can see us crawling through on our hands and knees in about a month’s time. That’s how ridiculous we are prepared to get!

I’ve cut down on running this week following tiredness due, almost certainly, to over training last week. I ran with the club 3 days ago and I’ll do Cambridge parkrun tomorrow but essentially I’m recovering. At present I’m feeling slightly listless. I had a haircut recently and I think my shorn locks weakened me further ( my stamina and strength was highest when my hair was long in the late sixties). Age shall not weary me but, as Samson found out, a haircut will! Just recently, someone commented that watching me run reminded them of the highly efficient T-1000 liquid metal shape shifting Terminator as he tries to catch nice Arnie driving away from the psychiatric facility with John Connor and his mum.

The club road running group did a Ik time trial then 4 further Iks. There were around 50 of us, split into 4 groups according to speed. I enjoy these !k distances. Yet again I made an effort to be more sociable and chat to people I don’t know. I’m still fighting an urge to run alone, to be the outsider, the maverick, the mysterious Runner With No Name like Clint in the Dollar films (minus the cigarillo for health reasons, of course).

Interesting BBC Radio 4 programme on May 20 called Personality Politics. The central idea was the contention that the brain is hardwired for political preferences. Our instinctive responses to danger, contamination etc may be exaggerated and over reactive and this might find expression in a correlation between political beliefs and our innate feelings of fear, disgust and threat. People who are socially conservative tend to emphasise punishment of transgressors, want protection from immigration, oppose abortion and gay marriage, have a stronger reaction to disgusting images and pay more attention to them. Conservative people are more focused on their personal feelings and more liberal people on the outside world. Apparently different parts of the brain are used corresponding to political preferences.

I can easily accept that particular beliefs and resultant feelings can activate different parts of the brain as an effect of those beliefs but not as a genetically hardwired cause. I think our early experiences, in the main, determine our degree of empathy, moral development and our response to difference and change. Disparities in brain functioning  would then follow the different beliefs and feelings as a result of those experiences, not the other way round. My head hurts now. I’m going to bed. Night night.