Day 20 and I’m still managing to run each day. Day 18 was Cambridge and Coleridge Running Club and we did 4 x 6 minutes intervals with 3 minutes rest in between. With warm up and getting to the location where we do the intervals, we ran about 6.5 miles. Tuesday was hot and we sweated buckets. This was OK for me. It’s the cold weather that I have   difficulty with.

Today I watched 20 minutes of Royal Ascot with my mum whose main interest is the female fashion on display. She was annoyed that there was far less fashion emphasis because of the adverts and also because Channel 4 don’t seem to value this aspect of Ascot compared with the BBC. Of course without the ads I wouldn’t have known about the Channel 4 documentary about the man with the Ten Stone Testicles (complete with video clip) or that Paddy Power is paying out for the first 7 places for some races.

Stephen Jones, milliner, was interviewed at Ascot and  showed a new hat that seems to have been inspired by Helen Oxenbury’s wonderful illustrations to Edward Lear’s The Quangle Wangle’s Hat (Picture Puffin).This hat was home to a multitude of magical creatures and was worn by the Quangle  Wangle who lived in the Crumpetty Tree. See image of Ascot hat below alongside of Oxenbury’s illustrations. Comment if you want a list of the resident creatures who include the Dong with the Luminous Nose.

Stephen Jones was good natured  interviewee but looked sinister in his formal top hat and tails. A bit like Donald Pleasance playing the role of a funeral director.

I got around to reading Wednesday’s Guardian today and learnt that the Government had placed a D notice on Edward Snowden’s release of information about British Intelligence spying on  delegates to two G20 summits chaired by Gordon Brown in 2009. A big story around the world but closed down for discussion here. 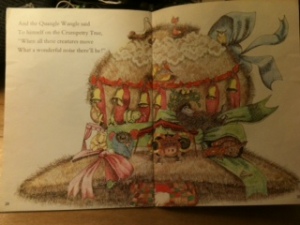 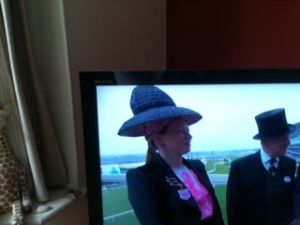