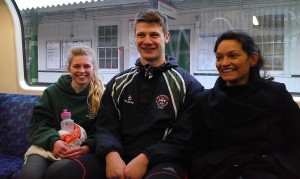 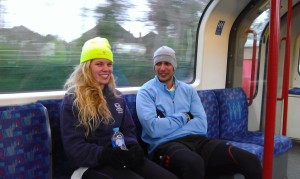 Last Sunday morning and we are on our way to a 10k race in Greenwich Park, London. These pics were taken on the Docklands Light Railway (DLR) before arriving at Greenwich . From the left, daughter Isobelle, her boyfriend Joe, daughter Shanti, daughter Sophie and son Dan. I tried on Joe’s bare feet running shoes. Very interesting, very odd. It would be nice to try a pair on grass. 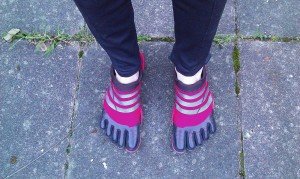 Two of us did 5k and four did 10k. The course was either  one or two laps of Greenwich Park, each lap including to long hills. The wind was bitter and there was no shelter before the race. On the positive side it didn’t rain and if you could get out of the wind, the temperature was relatively mild. I wore 2 shirts and a jacket plus gloves and took nothing off during the run. Dan stripped  down to a vest in the belief that the less he was wearing the faster he would run. By this logic, he’ll do best when running naked. And he’ll be a YouTube sensation as well.

It was an enjoyable race and it was great running with my children. I can even cope with being beaten by them. Only Dan is faster than me at the moment but (on this course) Isobelle and Sophie weren’t far behind. 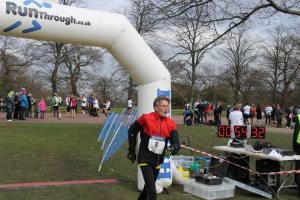 Here’s me running in my chosen open mouthed style. I couldn’t run any faster in these conditions and particularly with the extended hills which completely knocked me out ie I slowed down to the extent that striding might have been faster.

Parkrun on the previous day was the muddiest yet and again my trail shoes came into their own. A slow time because of the conditions but I ran better than last week when the conditions were similar. I also volunteered after the race, trotting around the course to collect the signs and direction arrows. I got back just in time to have coffee with our friends and our circle is still growing.We seem to be out growing the cafe and the weather’s not good enough to sit outside. For the first two years of parkrun I left directly after running but after Lorna started to come along I started to collect friends every week. How things can change! Lorna continues to recover from her Achilles tendonopathy and volunteers most weeks so despite her injury she’s still part of the running community.