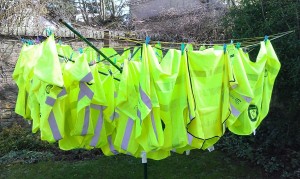 A tolerably good Cambridge parkrun today. The sun shone in a bright blue sky and it was chilly rather than cold. Nevertheless, I wore a long sleeved top and a light jacket with tracksters (plus gloves initially). I’ve no doubt the extra clothing has a mildly torpid effect on my running ability. I feel much freer and fitter in the warmer weather above 14-15C plus. I don’t mind running in the heat although with parkrun, which starts at 9am, the temperature is never a big issue.

Lorna volunteered as back up time keeper AND took all the hi viz bibs and jackets home to wash, at least 40 of them. Each of the Cambridge runs needs upward of 40 volunteers and at the moment they are having difficulty filling the positions. Today we had a rare, stern address at the start, informing the assembled runners that the future of Cambridge parkrun was in jeopardy unless more people volunteered and didn’t leave it until the organisers were tearing their hair out which was happening each week.

309 took part in the run today and I came in at 129 in a time of 24 mins 41 seconds. My ex-arch rival Mike finished 80th in 22 mins 57 seconds. He is now a Zeus like figure living on Mount Olympus while I am a minor deity inhabiting one of the forgotten little Greek islands dependent on sailors blown off course for company. Still, the days are getting warmer, and like a wronged and injured gun fighter (Clint Eastwood, for example) I feel myself getting stronger and preparing to take revenge. Oh yes, it’s only a matter of time before my adversaries will be scorched by my slip stream as I pass them like a dragster. Won’t everyone be surprised when I deploy my parachute on the finish line to bring me to a halt. They will beg to know the secret of my success and I won’t be slow to tell them : an increase in Brussels sprouts consumption and a new wonder breakfast: broccoli porridge.

A well known parkrunner, Terry, in the 65-69 age bracket, walked the 5K course just two weeks after having a heart attack, taking around 55 minutes. An act of defiance in the face of a life threatening illness probably but not very sensible,  I suspect.

My son and daughter, Dan and Isobelle, both got personal bests at Valentine’s parkrun. Dan is now sub 20 mins and Isobelle was less than 30 seconds slower than me. Great running, children, but remember, it’s participation and setting a good example by running alongside and supporting the slower runners, that’s ultimately important. Not getting a fast time. Remember that and slow down for the next five races, kids.