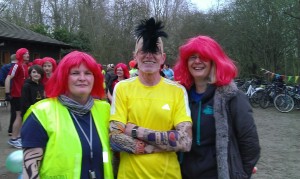 Following last weekend’s Cambridge half marathon when I ran a good time and then made it memorable by becoming dehydrated and requiring medical assistance (see blog dated March 10), I am now back to form. I ran with the club during the week and parkrun on the weekend. The Cambridge parkrun run director and her partner, who have bright red hair and a Mohican respectively, were stepping aside after four years. Dozens of regulars wore convincing wigs in celebration (see pic above). I think I should have spent more time finessing my coiffure. My lush Mohican came rather low and I had difficulty seeing my way around the course. I was also carrying a placard so my time was slow. Still, we had a lot of cake afterwards and everyone was very appreciative of the hard work they have put in since parkrun began in Cambridge. 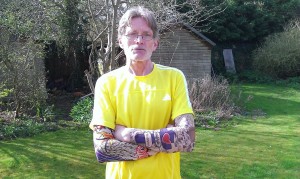 Here I am modelling my tattoo sleeves after the race. Generally I am anti tattoo but these sleeves are hardly distinguishable from the real thing (as long as they are viewed 20 metres away with sun glasses). I am now scouring the internet to acquire a whole body lycra  tattoo stocking! How cool would that be in Cambridge Central Library or a Tesco super store. 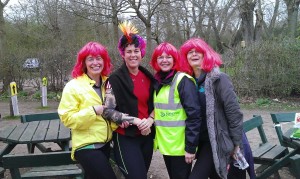 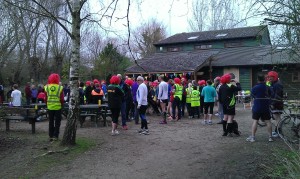 It’s curious how many runners revere cake! Very few of them seem to worry about the sugar or fat or calorie content. Anyway, it was a very enjoyable, OTT morning.

I attended a funeral last week and had yet further proof that, all to frequently, there’s nothing less Christian than a practicing Christian. I’ve heard examples from family before and also seen it with my own eyes. The genteel, comfortable middle classes Church goers don’t seem to be able to welcome anyone who doesn’t conform to their particular norms. This is very clear when their services are attended by individuals whose behaviour may be loud or inappropriate or if they look different. They simply get ignored or sidelined or frozen out. I witnessed the good church folks in action against a women who probably has a borderline personality disorder in the reception after the funeral service. They really should have been able to accommodate her and make the effort to respond and make her feel comfortable. But they didn’t. And haven’t done on other occasions. I don’t like being around such hypocritical people. I don’t like to see such displays of prejudice and unkindness. They don’t take their own moral teachings seriously. They are self righteous nitwits!

Hot news! Scientists have found evidence of the signal left by the super-rapid expansion of space that occurred fractions of a second following the Big Bang, leading immediately to the creation of the Universe. That fraction is estimated to be a trillionth of a trillionth of a trillionth of a second. Wow!! That’s even faster than the Tories took to start dismantling the NHS by letting the for profit companies take over services. That’s why we need health union leaders of the calibre of Bob Crow who very sadly died suddenly last week, aged 52.