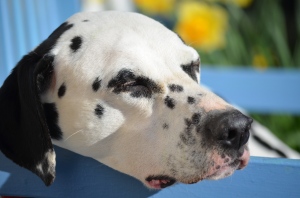 This is Rupert. Today, his behaviour was not socially acceptable. I took him for a walk, bumped into other dog walking friends, stood around chatting for a few minutes and Rupert took the opportunity to pee up against someone’s leg. He has form with regard to this habit having done the same on a number of occasions in the past. Even I have not been spared. Some people have suggested that it’s a trick I’ve taught him. Wrong, dudes! He’s self taught.

Cambridge parkrun yesterday. I ran as fast as I could but couldn’t get below 24 minutes for the 5k. The conditions were good but the Gods did not favour me, unfortunately. I’m considering worshipping a new set of Gods who are more in sympathy with my running goals. I think I need to go on longer runs and do some upper body training. With luck I should be able to regain the level of form I had last year. I’m not that far away rom it. Excellent result for my son Dan who came second at Valentines p,arkrun yesterday. The field was around 230

I went for a 9 mile run this afternoon. This was OK except it turned cold and my gloveless hands were freezing. It took a while to warm up when I got back. I felt overly tired and dozed on the sofa for an hour or so. I blame the lack of sunshine, relatively low temperature and the Tory government for this running outcome.

I read a review of Running Free: A Runner’s Journey Back to Nature by Richard Askwith. His argument is that running has become a high tech focussed industry (gadgets, clothes, shoes) and everyone is inappropriately obsessed with times, PBs, competiveness to the detriment of the simple joy of running and appreciating the natural environment. Saturday 22march 2014 Guardian Review, by Rose George.