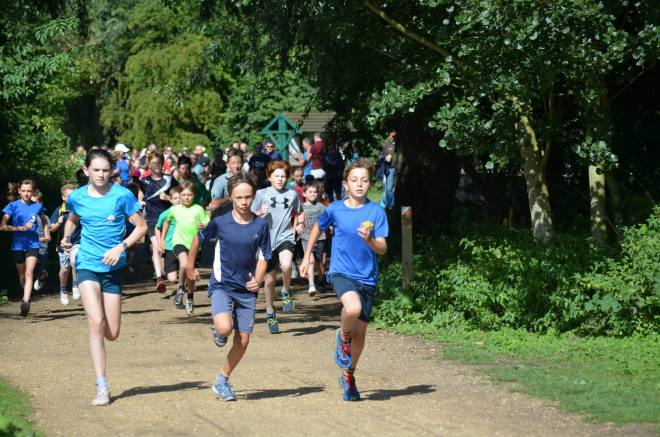 Cambridge Junior parkrun  last Sunday, a 2k run for children between the ages of4-14. This is the start and the girl on the left won it in a time of 7 minutes 36 seconds. A  fantastic run. 87 took part including some young ones running with their parents (who are not included in the numbers.

These three walked the 2k, explaining they were a caterpillar and couldn’t be hurried.

I was a timer again (one of two). This is fairly straight forward when the numbers running aren’t high and the children aren’t hurling themselves en masse at the finish line. Cambridge adult parkrun (5k) regularly attracts nearly 400 so timing requires much concentration when they come in densely bunched up and overtaking in the finish tunnel before they receive their position tokens. I did it a couple of years ago, in winter, when only 186 ran. The temperature was low and I didn’t have gloves. My hands were numb with cold. Two fingers snapped off. I didn’t stoop to pick them up; I merely carried on recording the times, selfless as ever.

Saturday’s parkrun was OK. I ran 24 minutes dead (if only I had run a second faster, I would have dropped into the 23’s and my self esteem would have survived intact. Note to self: work on losing that highly significant second).

Yesterday, I dropped off my daughter Sophie at Cambridge Station, parked and went running in the City. Or rather I ran up and down Mill Road, the “bohemian” part of Cambridge before heading for the dark interior, sucking in tourists like a black hole. Mill Road is nearly a mile long and has many interesting independent shops. At the end furthest from town, a big, new mosque complex is going to be built on a derelict site. No work started yet.

As described before, it’s curiously satisfying weaving in and out of the crowds in Cambridge. Although I’m not running fast in any sense of the word,  you feel oddly powerful and nimble negotiating the throng.They move so slowly and you have the impression of  occupying a different time frame.  I seemed  to cover a lot of distance because Cambridge is a small city. I ran around 5 miles before returning to the car, leaving many dozens of people in my wake gasping with the excitement at having witnessed a local running god (albeit in low gear).

Oh happy days! I found fresh Brussels sprouts in Tesco today. Where were they grown? Don’t know. Probably Tasmania and clocking up about 200,000 air miles. But never mind, they were delicious and on a par with raspberries. Yummy.

The Guardian reports today on loss of provision and funding crises experienced by Women’s Refuge Centres. http://bit.ly/UOw4Z3 The ability to blithely cut, or cut out, these type of essential services, in the name of austerity savings demonstrates what a bunch of shits local and national politicians are. If the public gaze is currently far away from domestic violence, then politically it’s worth taking the risk to cut funding along with other important, humanitarian services which have a low public profile. These politicians have a passion. A passion for putting the boot into small groups  of vulnerable people who have negligible voting power.