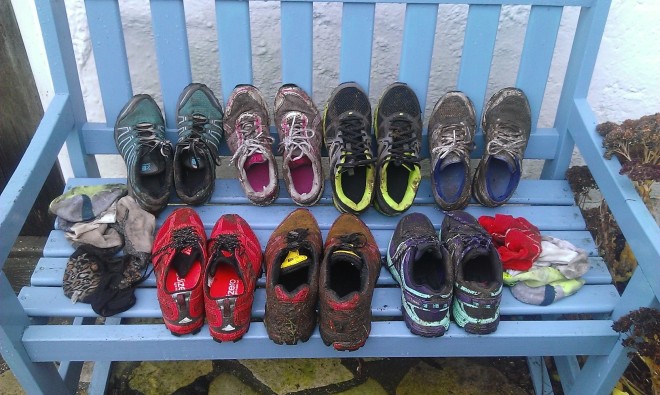 Yesterday’s Cambridge parkrun was excessively muddy! Clearly the East Anglia rain gods were having a laugh when they created pond sized puddles across the running path. In fact it was worse than that. There were bogs, quagmires, sloughs and quickmud (a close relative of quicksand). I personally saw three men up to their necks in mud screaming at passing runners to stop and pause their Garmins. It was the proverbial nightmare of a run. Or so it seemed. Somehow we survived it but our washing machines will be punished.

It wasn’t exactly like running in treacle but the mud certainly slowed us down. The numbers were about half the usual crowd although my family did its utmost to boost the total. I ran with Ms Alive and Running and our five children for the first time ever. Fantastic! My eldest son just beat me by seconds (well, 280 seconds actually which is nothing at all compared with the age of the Universe). In fact we all ran well and I’m very proud that we can all take part in a race together on occasions. The next opportunity will be Cambridge half marathon in March.

Next race is the New Year’s Eve 10k at Ely (on December 31st, believe it or not!) and a special New Year’s day parkrun at Huntingdon on, yes,you’ve guessed it, January 1st.

Cambridge junior parkrun this morning. 58 children between the ages of 4-14 took part, well down on the recent record of 138 but a good number considering the weather conditions. Plenty of icy, muddy puddles and an inspection of the course resulted in some changes to the measured 2k distance. Loads of parents became inpromptu marshals to line the course to maximise safety. One person dancing around, playing the flute and looking remarkably like the Pied Piper of Hamlin was turned away. They will have to wait just a little longer before their invoice for rat catching services are honoured.

We had a serious outbreak of origami in our house over Christmas and this is the result. Old Rupert annuals are a good source of origami creations and I soon found a spectacular pagoda to make although the above examples are from a recent book left by Mother Christmas. It seems that Rupert’s origami can be quite complicated and the instructions are often not adequate. The internet will provide, however.

My modest stash of Christmas books. Spitafields Nippers are poor children photographed in London around the start of last century. They reflect the harsh circumstances of their young lives and the dire poverty of their upbringings. Very poignant, very affecting. I’m sure God has a good reason for the breathtakingly high child mortality rate in times past, in this country and everywhere else. I would be oblige if anybody with a religious faith could provide a brief rationale explaining the religious justification for such suffering. I’ve read a few clever philosophical explanations but nothing which makes any sense to me. Please bring  enlightenment. Pretty please.

Gotta sign up for Janathon. Gonna be January soon.