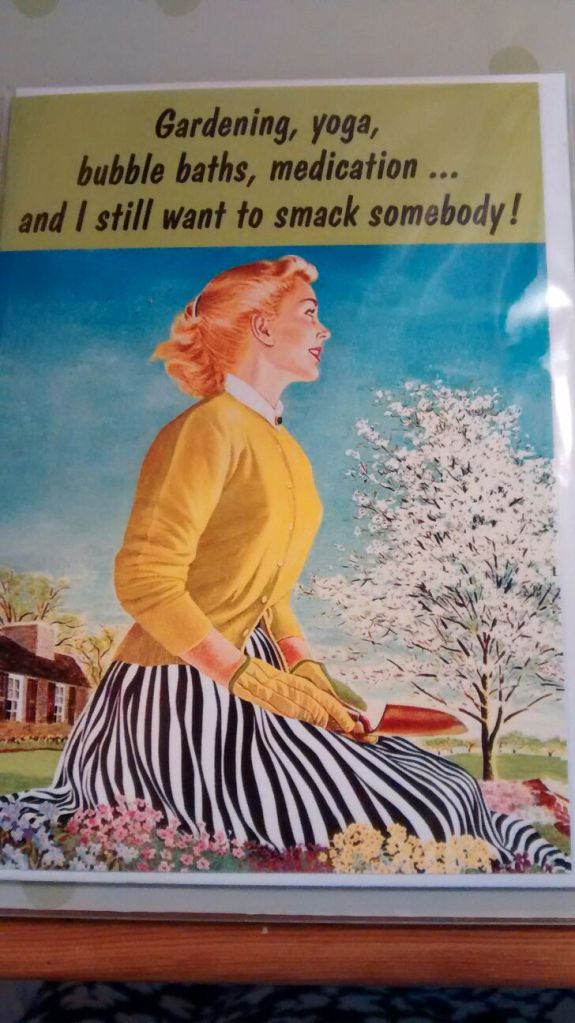 This Is a clever card on several levels. It encapsulates a British 1950’s sentiment of wholesome perfection, middleclass values and almost religious rapture. It identifies three modern activities which are associated with relaxation, fun or enjoyable self indulgence and, more darkly, a suggestion of medical treatment. And then reveals the existence of hidden and shocking aggression. Of course this description robs it of all humour which is recognisable instantly at first reading. Never mind! It still has the ring of truth if taken literally.

What it highlights is the common existence of feelings of passive aggression and an urge to exact physical retribution with no clear reason why. The right wing and gutter press are full of it with their emphasis on free loading benefit claimants, rhetoric against migrants, lukewarm belief or outright scepticism of asylum seekers and rubbishing as outmoded socialism, or trades union extremism, any policies which are designed  to benefit the majority rather than appeal to the personal gain of individuals. What you get with the evil Tories are clearly defined groups which purport to  threaten, steal, sponge or unfairly gain at the expense of ordinary hard working people, huge business subsidies and tax breaks to benefit their own class, and worthless but convincing reassurances like “The NHS is safe with us”.

Add to this the relatively recent vogue for extended news coverage of titillating emotionality (victims’ statements, views of neighbours expressing incredulity, people demonstrating extreme grief, shock or distress and highly charged press conferences), it’s all too easy to feel emotionally manipulated, diverted and  deceived. You think you are caring to feel upset but in reality it’s a passive, contrived experience which exploits both the grief stricken and the viewer. Not all the time but a lot of the time.

Thank God some great people have the capacity to keep it real. Dead pan humorous  real. Kanye West has just announced his bid for the 2020 American presidency thus giving a lie to the stereotypical view that Americans don’t get irony.

Not too much happening on the running front. Last week I went out with the club and we did a fartlek around Cambridge. I enjoyed it. The newer coaches are trying hard to be inclusive of all running abilities and I feel they are succeeding. It’s not easy to cater for fast runners in their teens, 20s and 30’s as well as slower people in their 60’s and coming up to 70. But the will is there. I think the key is two coaches per road running session so the less fast runners don’t feel neglected or a drag.

I marshalled at Cambridge parkrun on the weekend which I always find an education. My position allowed me to see the start of the race. Those lads at the very front are labouring under the misapprehension that parkrun is a race judging by their stance, concentration, and ability to filter out all extraneous distractions including encouragement as they hurtle around. At the other end of the spectrum are the runners struggling to improve despite carrying an awful lot of weight but wanting to succeed. And they are!

Jeremy Corbyn, prospective leader of the Labour Party has spoken about introducing women only carriages on some trains. I support this. I know this proposal has been roundly condemned by a sizeable proportion of talking heads but speaking on behalf of the male population, we really can’t be trusted to consistently behave ourselves appropriately. Everyday sexism and hormone inspired conduct is still rife. A compete indictment of male behaviour? Certainly. 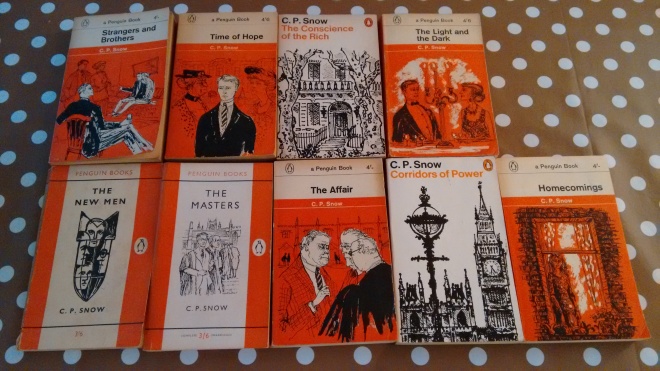 What’s this, then? C P Snow’s eleven novel sequence of novels,. Strangers and Brothers, Penguin editions published between 1962 and 1982 (not original published dates). Two missing but easily obtainable. I have read several of them decades ago but I will now read the entire sequence. They follow the life and career of Lewis Eliot from a provincial town in England to London lawyer, Cambridge don, wartime service in Whitehall, senior civil servant and finally retirement. The novels were published between 1940 and 1970. They encapsulate a previous age and culture which I find absorbing. Otherwise I wouldn’t be reading them, would I? The paperbacks are quite old and the pages are tanned. I think these aged Penguins are a marvel. Estimated time to completion : 2017. So many other things get in the way.