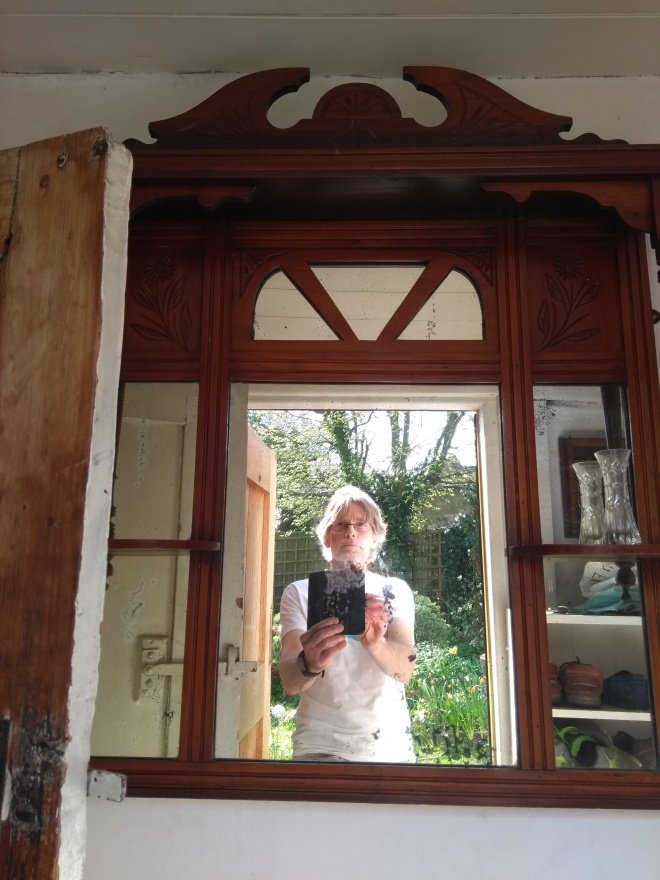 Here I am, an erstwhile running god (minor), reduced to taking a selfie to remind myself that the sun can still back light my long hair. Unfortunately just after this shot, I was restrained, transported to a local barber not known for his sympathy towards “elderly gentlemen with long locks” and shorn forthwith. His parting shot to Lorna was “Unfortunately we get a lot like your husband. They don’t want to grow up, see?”

Fact or fiction? Reader, you decide. What isn’t up for conjecture is the imposition of further injuries. Nine days ago, following rest, physio, a relaxed 48 minute run, further rest and no problems identified, I did parkrun and put effort into it. Result? My hamstring pain returned with a vengeance and has lasted. I didn’t do parkrun this Saturday nor a 10k Hoohaah race the following day. To add insult to injury I have developed a neck ache and caught a cold. To a highly tuned running machine like myself, this is not good news. What will I do? I’ll discuss it with my physio and rest until next weekend when I’ll do parkrun again. I’m due to do another 4 mile run directly after parkrun in anothe village. I might do them both and take it easy. I might do one. If the injury returns, I think I’ll stop running for three or four weeks.

The Windrush scandal! The evil Tories have imposed an immigration policy, since around 2010, when Theresa May was Home Secretary, which has the clearly stated intention of creating a “hostile environment” for illegal immigrants. In their haste to ingratiate themselves with the gutter press, the credulous electorate and the substantial numbers of unthinking xenophobics, they targeted numbers of the Windrush generation. These are the thousands of Caribbean people who were encouraged to come to Great Britain in the 1950’s and 60’s to work in transport, hospitals, nursing homes and the Post Office. Now, their children having lived their life in this country and not having the required paperwork to prove their legal residency (because the government has lost or shredded it), are under threat of deportation, cannot access services or treatment on the NHS or benefits, cannnot work, are detained and lose their housing rights, despite working in Great Britain for decades.

The evil Tories are now squirming and Amber Rudd, Home Secretary, has resigned only because this scandal has now blown up, thanks to the Guardian, despite going on for a considerable period of time. I take it as read that the Tories, as a whole, do not have a moral compass and will run roughshod over the most vulnerable groups without compunction. What is different about the Windrush situation are the blatent lies uttered by Rudd as she scrambed to put the blame on over zealous officials and civil servants. They were hers and May’s policies which advocated the “hostile environment” and keenness to wrack up the numbers of enforced deportations.Nevertheless, she professed no knowledge of the egregious consequences until leaked documents showed she was lying. The Tories simply don’t care, along with large swathes of Tory voters and Mail readers. The bar for veracity and compassion is now so low for Tory politicians that most people will see Rudd’s demise as just a bit of political fallout. She should be banned from politics and acknowledged to be a public disgrace.