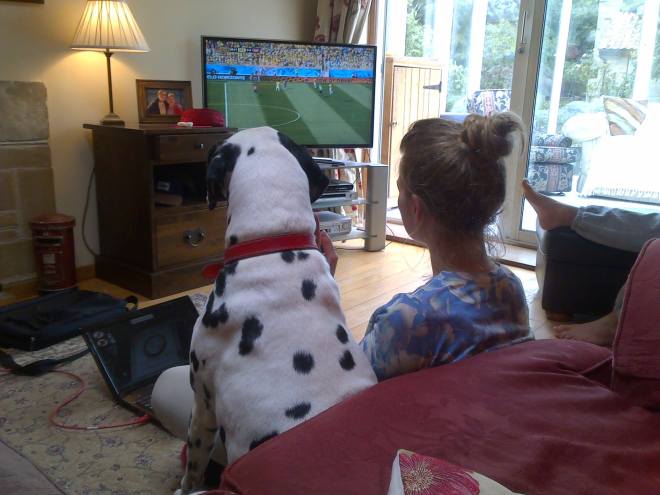 I really had no idea that Rupert was an avid Brazil fan. Or was capable of hiding behind his paws during the penalty shootout yesterday. Or drank lager. Clearly he’s very much into World Cup football. He even ordered a hot dog to eat at half time! I heard him whisper to Isobelle  that Suarez’s bite is worse than his bark.Normally he has no interest in TV (apart from watching a certain Disney film) and as for supporting Andy Murray at Wimbledon, forget it.

I have only ever taken Rupert running on two occasions and today was the third. Running with Rupert is a mixed blessing. He is a highly skilled wee and poo merchant. He can’t trot more than  100 metres without stopping either to pee half a pint or leave a marker. He’s also a three poo a day dog. I suppose I have to count myself lucky I only had to pick up one. He’s got no road sense, randomly changes from left to right side and vice versa and is constantly on the lookout for something discarded to eat. Nevertheless, I enjoyed running with him. We ran around 9.5k which was enough for us both.

Today was the trial run for Cambridge junior parkrun and it went off with flying colours. Unless you are actively involved in the nuts and bolts of parkrun, it’s difficult to appreciate the time, effort and worry that goes into making it happen safely and successfully. 52 children participated, along with many parents and 25 volunteers. The inaugural run will take place in a fortnight and at least 100 children are expected to take part.

This young girl smiled and giggled her way around the 2k course. Not surprising, really, since she is a veteran of the adult parkrun. Her father has whizzed her along in an off road buggy since she was a baby! She was accompanied by her dad and pictured here with  tail runner Julie. 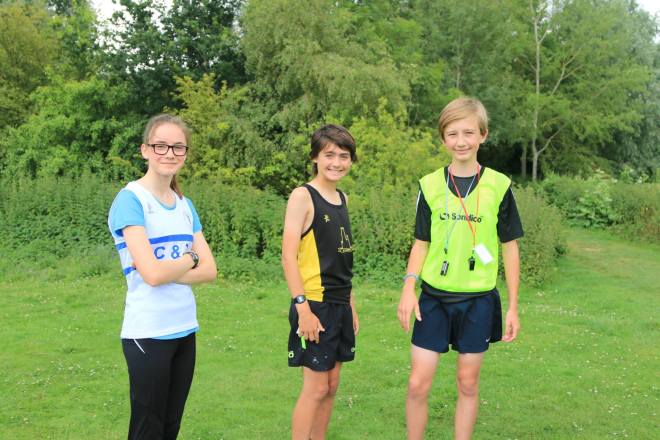 Finally, the first girl to the line and the first and second boy. A very enjoyable and uplifting morning. The weather just held until everything was packed away and everyone went home. The weather has been pants, as they say, for the last 2 days. But hold on while I place my gardening hat on my cranium. Wow, I just love this weather. I can hear the garden squeaking with delight at the amount of rain that’s fallen, helta skelta, out of a leaden sky. Thank you, rain gods.