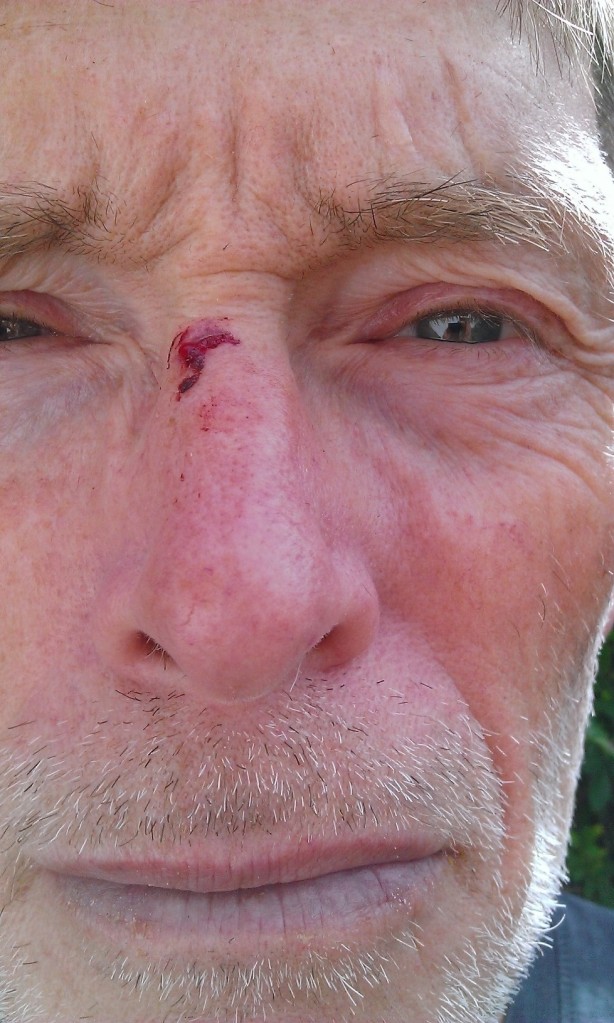 This shocking, non life threatening injury was sustained at my local Tesco supermarket. I can’t lay claim to seeing off a gang of thugs who were menacing a hard working but meek and elderly tax payer. I didn’t fight a duel in the carpark to prevent my honour  being besmirched. But I can confirm that one of their trolleys has got a mean attitude. I usually take one of the smaller, shallow trolleys which stack together and should pull out easily. Sometimes the metal panel which swivels to allow them to stack gets stuck. Through experience and the application of hard won technical wisdom, I have learnt that a short, sharp knock will free the swivelling panel and allow me to wheel the trolley away. Not sure why but this expected outcome didn’t take place. Instead I thumped it too hard and the panel flipped over and hit me on the bridge of the nose. Blood was dribbling down my face and I had to seek first aid at the customer services desk. Following a Code One call over the PA system a first aider appeared, quickly, accompanied by an assistant and, I think, the duty manager. They suggested I move away from the public gaze while they cleaned me up and wanted me to sit down. It was my minimal expectation that a running god like myself would be ushered into a side room with discreet classical music playing and offered strawberries while I reclined on a chaise longue. This didn’t happen. Instead I walked 3 metres and sat on an electric store buggy while the three Tesco people worked on my nose and the queue of people waiting for customer services gawped at me. Still, I got prompt attention despite their lack of recognition that I am a running deity. I wouldn’t be surprised that, had I gashed my nose deeply, they would have publicly stitched me up.

Out running with the club two days ago. We ran the course for the 5K interclub run next week. There weren’t many of us and the course wasn’t familiar to me. I think I was still feeling tired  from running a training 13 miles two days previously. As a result, despite a feeling I was flying like the wind, I did a slow time. It was even slower because I went the wrong way three times. Interestingly, the warm up and warm down exercises were as demanding as the 5k itself (almost). After the session, I drink 500 mls  of water in the car and tonic water with my evening meal on my return.This regime is keeping the cramp at bay. 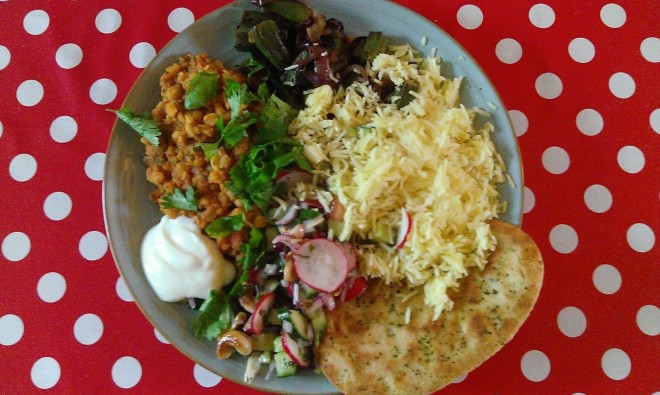 I cooked a dal this evening. Unfortunately I put in a large spoonful of extra hot chilli powder instead of turmeric and didn’t have yogurt to cool it down. This job was left to the radish, red onion and cucumber salad accompanying it. Still too hot but edible!

Still waiting for Cambridge MIND to contact me regarding my proposal for a gardening ecotherapy project in the field behind my cottage. They said they were interested and I’ll hopefully meet up with them soon.

Inside Health, BBC Radio 4, is well worth catching as a podcast on iTunes. The programme takes a critical, weekly look at health issues and has just completed 3 editions devoted to conflict of interests by drug companies, researchers, the medical world and the public. Very interesting. Forget transparency!