No parkrun for us last Saturday. We went down to London and took part in the anti Brexit march from Park Lane to Parliament Square. It’s always impressive when tens of thousands turn out on principle for a cause that doesn’t include hatred or fear of specific groups. British membership of the EUmay be a lost cause but the run up to the referendum revealed many ugly perspectives -xenophobia, bigotry, utter stupidity, credulousness, easy susceptibility to right wing opinion and media, licence to abuse and scapegoat particular groups and hostility to change. I could go on. Consequently, I’m left with an awareness that large sections of the population think and act very differently from me and hold opinions and values diametrically opposed to my own. Oh dear! What can one do? Go for a run, I suppose!

The view from Westminster bridge, up river, featuring a pile of box buildings and a cylinder like high rise. If you look carefully, you can spot a few trees. Obviously architects won cart loads of awards. The scale of modern design can be very impressive, particularly in a setting on a wide river but its got no soul and no real substance. It is just a jumble of conventional shapes, configued to suggest they occupy a hill and disconnected from its surroundings. What I do enjoy is modern buildings cheek to cheek with old buildings, modern architecture next to little historic alleyways. Like in Blade Runner. 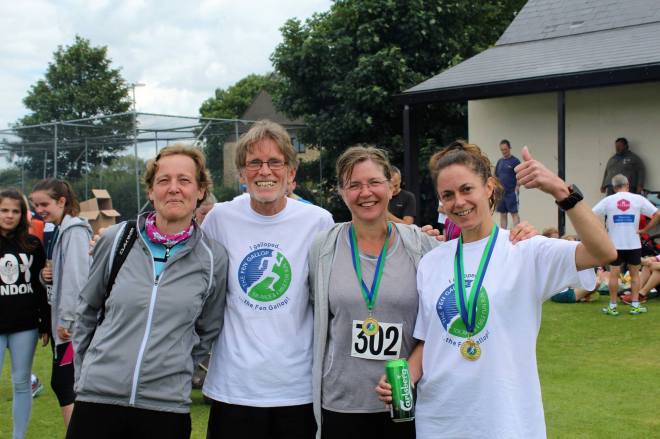 Me amongst the women. We had just completed a 10k trail run. I’m wearing the tee shirt from the finisher’s goody bag having flung off my canary yellow top. It was warm and sunny and the colour yellow attracted hundreds of little flying pollen beetles to settle on me and fly around my head. I’ve made this mistake before and I’ll probably make it again. I ran to about 90% capacity (my new normal) and felt more comfortable with this level of exertion. A lovely run with some lovely people.

Kenneth Clarke, Conservative “big beast” and my current hero of the day. He was caught on a live Sky microphone making unguarded comments about fellow evil Tories vying for leadership of the party and instant Prime Ministership. He described Gove as “wild” and capable of starting wars with three countries, another contender Andrea Leadsum, who supported Brexit, as a secret remainer and Theresa May, present Home Secretary and favorite to win as “a bloody difficult woman.” Hilarious!