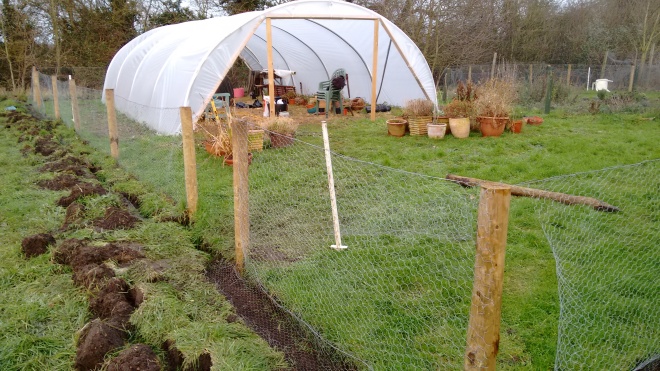 The weather has turned very mild again ( in the East of England). This afternoon it reached 13C and I was wearing a tee shirt (plus a few other items) when I continued building the rabbit proof fence around the polytunnel and allotment area.  I suddenly became aware of large group of rabbits, at least twenty, about 30 metres away, who appeared to be watching me and laughing. Several of them began to jump as if on springs and must have reached a metre in height. By coincidence my fence is a metre high. Clearly I will have to keep an eye on this. If the rabbits team up with the muntjac deer, it could go from bad to worse. I had visions of the deer carrying bunnies on their backs to assist them to jump down over the other side..

I had a lie in this morning so Rupert had a late walk, I went to the Emmaus community shop, did other stuff, worked on the fence and then went for a late two mile run just before dusk instead of a long run as I had intended. Never mind, it was still a productive day. I managed to buy a sturdy six foot by three foot table in Emmaus which is perfect to use as a craft surface for screen printing, cutting stencils and tee shirt design.

The Tory party has announced plans to help Muslim women to learn English and Cameron said a £20m fund would provide classes for all women struggling with the language. He linked better or attainment of English skills with helping to prevent radicalisation. However, the coalition government severely cut funding for language classes aimed at migrant women and between 2008 and 2015  there was a £160m reduction in available funds for teaching English to this target group. This is high end deceit. The Tories specialise in it.

5 thoughts on “Janathon Day 24 The rabbits are coming…..”