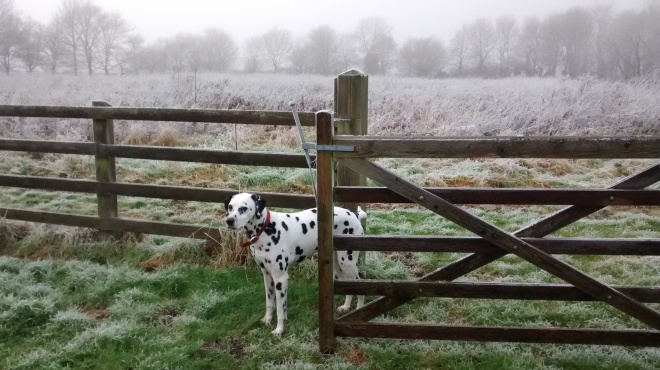 Rupert considers his next move. Actually this pic was taken last year, or even the year before, when it was particularly frosty. He struck a similar pose this morning but there was no frost  and I didn’t think it worthy of a picture. He’s still sulking. I’m thinking of making an appointment with the vet. Is narcissism in a dog treatable?

Cambridge parkrun this morning. Muddy and mild. I’ve done the last four Cambridge parkruns within four seconds of each other and two of them in identical times. I’ve noticed similar patterns before. I don’t look at my watch during the run and always run as fast as I can. Conclusion? Week to week I am very consistent or rather I have periods of consistency. At the present time I am consistently running two minutes slower than in October last year, just before I fell in a half marathon and injured my thigh. Injury is all cleared up and I feel I am flying. Conclusion? The nature of time has changed. It’s obviously speeded up!

Still, I enjoyed the run and had a nice cup of coffee with Eric and Kerry. The women were surprisingly absent so we were able to endlessly discuss football, darts, fast cars, technology and do a bit of online gambling on our smart phones. We also took turns to read off our running stats from Strava, Garmins and Fitbitty things. And then we went to the pub and sank a number of pints. No, I’m making this up. I just had coffee with Eric and Kerry and we chatted about running stuff. An enjoyable morning.

2 thoughts on “Janathon Day 23 Can you take me seriously?”