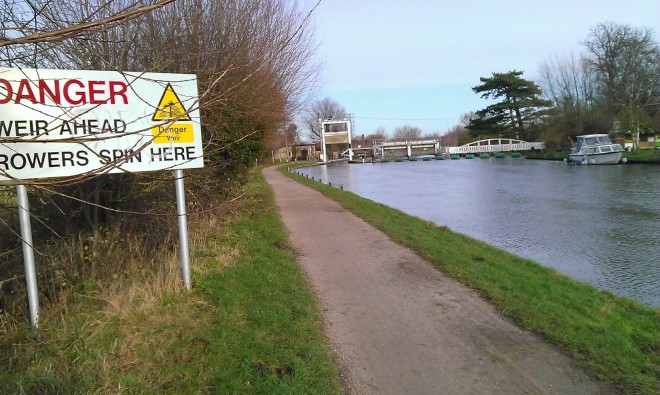 Unlike the North the weather was sunny in Cambridge today and not excessively cold. I didn’t get out until the afternoon when it had started to cloud over but running conditions were still very good. As a result I was more motivated to run further and did 9.8 miles in all. That took me 1 hour 36 minutes 50 seconds including four stops to take pics.

Unusually I was not accosted by seductive water nymphs, and the lonely river side path bathed in sunlight gave me the perfect opportunity to try out a new running strategy which undoubtedly will catch on like wildfire. I ran backwards for 10 to 30 metres at a time interspersed with what I now call old fashioned, conventional running. I felt quite comfortable with this new style and only experienced a mild sense that possibly I might bash into someone, despite knowing there was no-one in sight. I now urge everyone to give it a go. You’ll find yourself running as a toe striker and have a good view of where you’ve run from.

The success of this revolutionary running technique spurred me on to try another unconventional method. I turned around 360 degrees as I ran. Exhilarating or what? I did this several times and it went well. I almost felt I could fly! Pushing it a bit further, I did two 360 degree turns in succession, made myself dizzy and nearly fell into the river. Back to the drawing board on that one.

I saw 7 runners while I was out, plus a gaggle of 25 walkers, kitted out, unbelievably, for walking. Why would they be walking when they could be running? Funny people.